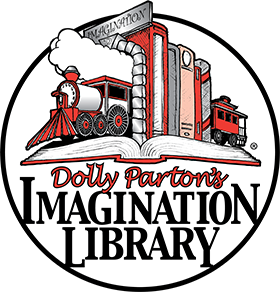 Dolly Parton’s Imagination Library is a book gifting program that mails free, high-quality books to children from birth to age five, no matter their family’s income.

After launching in 1995, the program grew quickly. First books were only distributed to children living in Sevier County, Tennessee where Dolly grew up. It became such a success that in 2000 a national replication effort was underway. By 2003, Dolly Parton’s Imagination Library had mailed one million books. It would prove to be the first of many millions of books sent to children around the world.

Dolly’s home state of Tennessee pledged to pursue statewide coverage in 2004 and global expansion was on the horizon. After the United States, the program launched in Canada in 2006 followed by the United Kingdom in 2007, Australia in 2013 and the Republic of Ireland in 2019.

Each month, Dolly Parton’s Imagination Library mails a high quality, age appropriate book to all registered children, addressed to them, at no cost to the child’s family. Countless parents have shared how excited their child is when their new book arrives each month. Many groups and individuals work hard behind the scenes to make that special moment possible for each child.

The Imagination Library provides the infrastructure of the core program including managing the secure central database for the Book Order System and coordinating ook selections and wholesale purchasing. It also incurs the cost of the program’s administrative expenses and coordinates the monthly mailings.

“In December of 2021, Denise Damron, the Executive Director of United Way, reached out to us with news that the United Way wanted to provide seed money to our county to expand the Dolly Parton Imagination Library.  After meeting with Denise, we were excited to have the opportunity to begin this program in our district.  Early exposure to reading and books is a vital part of child development.  It helps children develop vocabulary and skills they will need for school and life.  The Dolly Parton Imagination Library gets books into the hands of children at an early age which in turn helps their transition into school.  We are thankful for the opportunity to provide these books to children in our community.”